Skip to content
copingwithchildhoodillnesses in Uncategorized May 1, 2018May 2, 2018 827 Words

What an exciting and meaningful few days!  My son (Jake) and I recently went to Washington D.C. to help advocate for important legislation before the Senate and House that would have a sweeping impact on the fight against childhood cancer.  What we didn’t realize is that in addition to taking on important issues for the cause, the powerful experience itself would be so emotional and inspirational.

We initially gathered with some 200 people on April 23 for advocacy training organized by the Alliance for Childhood Cancer.  Those 200 people were made up of childhood cancer patients and survivors, family members, researchers, lobbyists, medical professionals, staff and a United States Senator.  The group traveled from 37 states all for a unifying cause — to make the future better for children fighting cancer.  The bond in the room was palpable.  Each person there had been directly impacted by childhood cancer somehow.  My son Jake has been a patient for over 13 years fighting his initial cancer and debilitating side effects.  I have been by his side each and every day, wishing I could do more!  The opportunity presented through this impactful advocacy group allowed that wish to be granted.  It provided a way to become an active participant in making things better for all of the brave children diagnosed with childhood cancer.

The issues and advocacy training day was awesome.  We learned a great deal about past and current legislation along with general medical information and advocacy techniques.  It was our first time attending so we were truly thankful for this help.  Little did I anticipate, we were called on stage to share our cancer journey and engage in realistic role playing activities in front of all participants.  I was frazzled from a heavily congested drive into D.C., but found it surprisingly easy to wing it.  I think that when you live each day dealing with the challenges presented by this awful disease, telling the story becomes second nature.  For better or worse, it becomes part of who you are – for the patient and parent(s). As the next two days unfolded, that became more and more apparent.  Other participants introduced themselves readily, shared their stories, and graciously complimented our brief “on stage” appearance.  We have all faced this dreaded disease.  We have all worked through fear and immense difficulties.  We all understood the dynamics of pain, family disruption, intense worry, financial concern, immense love, sadness and so much more.  For that reason, we became instant friends fully committed to making a positive change.  Smiles, hugs and shared contact information became the common theme of the day.

The next day we proceeded to Capitol Hill together to meet with legislators to encourage passage of the Childhood Cancer Survivorship, Treatment, Access and Research (STAR) Act introduced by Senator Jack Reed.  The STAR Act is the most comprehensive childhood cancer bill ever taken up by Congress.  Major components include: (1) widely expanding opportunities for childhood cancer research; (2) improving childhood cancer surveillance through tracking incidences and collections of cases, including biospecimens, into a national registry; (3) improving the quality of life for survivors (2/3 of survivors suffer from serious after effects); and (4) ensuring pediatric expertise at the National Institute of Health.  It is important to note that childhood cancer is severely and grossly underfunded currently.

Fortunately the bill had already been passed by the Senate and had over 80% support in the House at the time of our venture.  The main goals of our efforts were to gather additional support in the House, to encourage leaders to bring the bill to the Floor for the official vote, and to appropriate the funding needed to make the provisions of the bill a reality.  All of these aspects are crucial and not to be taken lightly!

Our passionate group set out to bring a face to the bill.  We sought to inform the members of Congress of our individual stories and to remind them of their power to truly help fight childhood cancer – a devastating disease that horrendously impacts thousands of innocent children as well as their families, caregivers, friends, neighbors and entire communities.   Cancer is the #1 disease-related killer of children in the United States and more than 379,112 survivors live amongst us, many of which require serious aftercare.  These children deserve a voice and they deserve better.

The day was long, powerful, rewarding, tiring and unforgettable.  Senators, Representatives and Staff Members were extremely pleasant and positive.  Children could be seen cruising the long hallways in wheelchairs, braces, masks, bandages, some displaying limps, prosthetics, hats, bald heads and obvious disabilities.  The evil cancer causing these visible impacts could not dampen the spirit and resolve of the Alliance for Childhood Cancer advocates.  It was a hopeful experience, and an honor to be there championing this crucial and personal cause.  Most people spent the entire day meeting with important decision makers and legislators.  Everyone left feeling tired and drained, but with happy faces and full hearts. 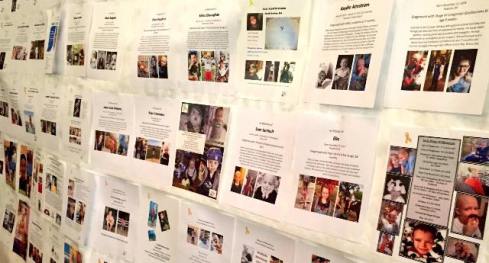